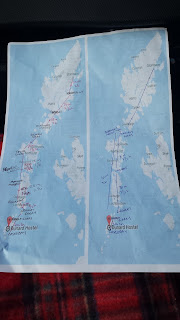 Lead-in This was an awesome adventure but what makes it particularly remarkable is that it very nearly didn't happen at all. Below is some dialogue in part that I had with a very affable gentleman at the local hospital, who actually turned out to be on my side. "Mr Ingram your wrist is broken in two places one of which is a nasty break, therefore we recommend that you have the plaster on for at least six weeks" "that's simply not possible" "and why is that?" "well we're going on a cycling trip in four weeks... and I AM GOING even if I have to take the plaster off myself" "mmmm okay book an earlier appointment and if it's not quite ready we'll put a light splint on and go from there" Yes, I thought that's more like it. Game on! Stornaway to South East Lewis ... but it nearly wasn't 'game on' it was so close to being 'game off'!  I suppose that makes us appreciate someth
9 comments
Read more